These are carried into Council meetings by the City Officers and are on display throughout the proceedings. They also head up processions for Church Services which the Lord Provost is attending and are used on state occasions within the city e.g. the Ceremony of the Keys when Her Majesty, The Queen, arrives in Edinburgh and the Ceremony of the Keys when the Lord High Commissioner to the General Assembly of the Church of Scotland takes up residence at the Palace of Holyrood House for General Assembly week. 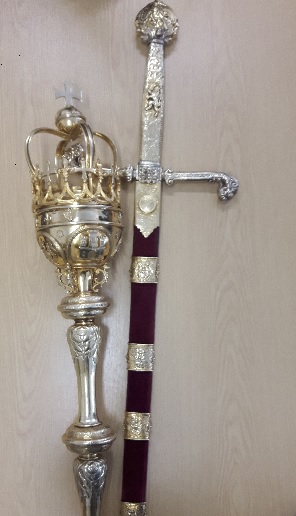 It is not known when a Mace was first used in Edinburgh but Town Council Minutes of 13 February 1554, mention the Macer as one of the officials of The Burgh. The Mace used at this time, appears to have been fragile and smaller than the present Mace used today.

In 1609, within a Charter granted to Edinburgh, James VI mentions "that in all well constituted commonwealths the whole Magistrates were not only permitted but ordered to carry and bear Bundles of Rods and such ensigns before them as signs and tokens of their magistracy".

The Order for making the present Mace was given on 18 December 1616 to George Robertson, an Edinburgh Goldsmith.  The cost of making the Mace was £874.10/- Scots; roughly £80 by present day standards.

This James VI Scottish silver gilt mace, weighing 142 oz. is very ornamental with the Royal coat of arms depicted within the crown surmounted by cross and orb and border of crosses and fleurs de lis, entwined on a reeded gallery, plain band below, applied with Tudor roses, thistle, fleurs de lis and harp, below which are applied two Royal Insignia and two castles. The whole supported on a knop chased stem by four scrolled Wyvern’s to urn shaped knop with chased flutes and leaves, the lower handle dumbbell shaped with foliate and shell chased decoration on each terminal, a large three-tiered flat knop between resting on a bowl-shaped terminal, 39.5 inch long. Hallmarked George Robertson 1617, Deacon George Cranfuird.  Vide: Jacksons silver and gold marks edited by Ian Pickford, pp 541.

The above Charter also granted to the Lord Provost of Edinburgh the privilege of having a sword carried before him; but the King's generosity stopped short of presenting one, and for this the City had to wait until 1627 when Charles I presented the one still in use.  The sword was presented to the Lord Provost, David Aikinhead, along with a gown to be worn by him on official occasions. The sword is marked with a Thistle and the date 1627.

The Sword blade is 36 inch long with round and damascened decoration dated c.1627.  Repousse chased in the Mannerist manner with a crowned lion, a unicorn and a harp. On each side are two views of Edinburgh Castle, wrigglework edges, probably contemporary with blade. Hilt - crosshilt also in the same style with two grotesques, one upturned, one downturned, possibly later pommel decorated with classical scenes of Terpsichore and Venus with two Caryatides on the shoulders, possibly later.  Sheath - 37 inch long, yellow metal scabbard set with medallion of Edinburgh Castle on one side and coin of Charles I on other in purple velvet with grotesques in the mannerist style, ferrule engraved with two nymphs.

The City Keys are kept by the Director of Finance, who before 1975 enjoyed the official title of the City Chamberlain. It is thought that they represent the keys to the old ports or gates of the City - a link with the days when Edinburgh had a town wall for the defence of the community. 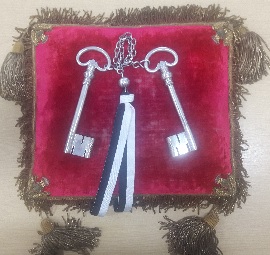 The ceremony of presenting the keys to the sovereign dates back at least as far as the reign of Mary Queen of Scots, upon entering Edinburgh in 1561.