The Lord Provost is Edinburgh's civic head, an ancient office dating back to the 13th century. 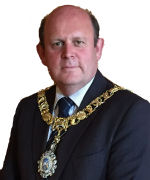 The Lord Provost is normally elected every four years from the 63 members of the City of Edinburgh Council and is the Convener of the Council and continues to carry out the normal duties of an elected member.

In May 2017, Councillor Frank Ross was elected as the Rt. Hon. Lord Provost and Lord Lieutenant of the City of Edinburgh.

The Lord Provost represents the Council on numerous bodies and organisations including:

As the civic head for the city and Edinburgh’s ambassador on the world stage, The Lord Provost’s international duties are varied, including-

In 2019/2020, some 25 Civic Receptions have taken place at the City Chambers, hosted by either the Lord Provost, Depute Lord Provost or a Bailie to mark citizens’ commitments.  Across the year: •  364 civic events took place; •  197 speeches were delivered; •  34 lieutenancy events were scheduled to take place; and •  159 voluntary organisations were visited. Overall, and including business support activity, civic engagements totalled 690, averaging 58 per month.

If you would like to learn more about the work in the Lord Provosts office during the past year, have a look at our report here  Office of Lord Provost: Year Three Report 2019/20  submitted to the City of Edinburgh Council meeting on 30 June 2020.