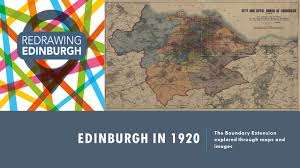 "This week marks 100 years since the Edinburgh Boundaries Extension and Tramways Act 1920 came into being, which incorporated the outlying communities around Edinburgh (the Burgh of Leith and the Midlothian parishes of Corstorphine, Colinton, Cramond, and Liberton) within the newly expanded boundary of the City of Edinburgh – creating the Capital as we know it today.

The boundary extension is important to our city’s history not only because it grew by a third in both size and population at the time, but because it also created the foundations of modern Edinburgh. From housing and leisure to transport, our city’s evolution over the next 50 years was shaped by the vision of a ‘Greater Edinburgh’ that was expressed in the passage of the 1920 act.

Edinburgh’s story has many strands to it. It is both Auld Reekie and the Athens of the North; Scotland’s capital and a global festival city. Some strands are well known and rightly famous around the world, but others are known only to us locals and expatriates. The importance of community history is that it keeps these lesser-known strands alive and passes them from one generation to the next.

In this time of pandemic, the combined experiences of working from home and staycations have meant that we are all becoming more aware of the community we live in. From discovering new paths to walk or jog, to seeing a building or view that we used to drive by without a thought, we are discovering our neighbourhoods and now is a great time to learn more.

Each of our communities has a wealth of local history stories. Whether it’s local heroes of the past, businesses and institutions gone by, or changes to the physical geography, communities have stories that explain what they used to be like and how their present came to be. It could be Romans in Cramond and Colinton, cave dwellings in Gilmerton, healing wells in Corstorphine and Liberton, or the first recorded game of golf with written rules which was played on Leith Links.

Original plans to mark the anniversary included both a civic event in central Edinburgh and local commemorations and events in the communities who joined in 1920, with a Central Library exhibition of photographs and objects relating to the boundary extension and the communities. We hope to do these next year.

In collaboration with community partners, our Archives, Libraries, and Museums and Galleries services started a digital activity programme over the summer under the banner of ‘ReDrawing Edinburgh’ to commemorate the event and to celebrate the communities that came into the city.

In addition to the digital exhibition on Capital Collections launched this week, several local history videos have been created and shared on the Council’s social media channels under the ReDrawing Edinburgh banner. New videos, telling a wide range of different stories, are planned for each month until the physical exhibition opens at Central Library in spring 2021.

I hope you get a chance to enjoy them and to learn something new about your area."