The Lord Provost's Badge and Chain of Office

Worn by the Lord Provost at his/her first and last Council Meeting and all other ceremonial and official occasions.

The Lord Provost's present Badge and Chain was first worn by Lord Provost, Sir Mitchell Thomson on 6th July 1899, for the occasion of the Freedom of the City to HRH The Prince of Wales (afterwards King Edward VII). 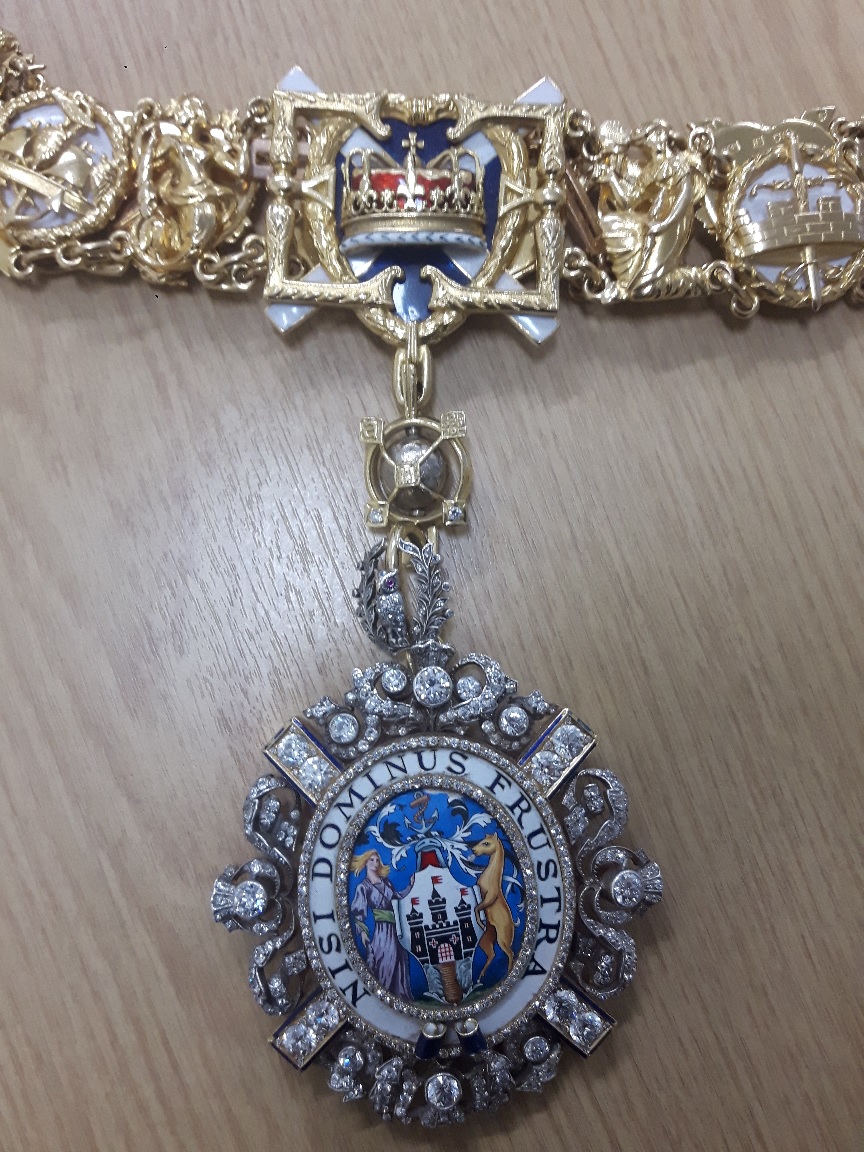 The chain was made by Messrs Brook and Son, George Street, Edinburgh.  It is made of 18ct gold, 46 inches in length, 1 inch wide and weighs between 40 - 50 oz.  The centre square link has the letter "E" facing each other and joined by a heart of laurel, symbolic of the "Heart of Midlothian". It also has in the centre of the two "E's" a replica of the old Scottish crown.

The other plaques on the Chain show the other offices or titles held by the Lord Provost;  ­Triton of the Sea; the Mermaid and the Ship and Anchor associated with the title, Lord High Admiral of the Firth of Forth; the figure of Justice and Scales as Chief Magistrate; the Crown and Sword as Lord Lieutenant of the County of the City of Edinburgh, the Queen's representative and first citizen in the Capital city of Scotland. Spaced throughout is the figure of St. Andrew with the Cross. Suspended from the Chain is the Jewel, which has the owl loop - the bird of Minerva, symbolising wisdom and referring to the old connection between the Town and University.

There are 470 brilliant and 22 rose diamonds, in all 492, and they weigh between 23 and 24 carats. The Jewel weighs 4 ounces and has in blue and white enamel the City Crest of Arms and the motto – “Nisi Dominus Frustra,” the interpretation being "Except the Lord in Vain".

The full meaning is - "Except the Lord build the house, they labour in vain that build it, except the Lord keep the City, the watcher waketh but in vain" - from the 127th Psalm. 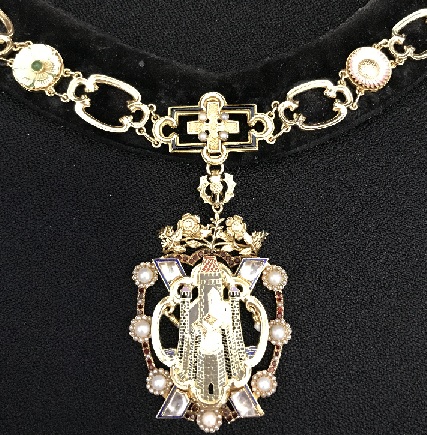 The Lady Provost's Badge and Chain of Office

Worn by the Lady Provost at ceremonial and official occasions.

On 17 October 1935, the Lady Provost, the wife of the retiring Lord Provost Sir William Johnston Thomson, was given a Badge and Chain of Office.   This was the result of a movement in 1935, which had its origin in a Women Citizens' meeting, that the women of Edinburgh should provide the Lady Provost with a Badge or Chain of Office. As a result of an open competition for the design, that of Miss Mary Wood, an Edinburgh Artist, was chosen and the work was done by Messrs. Brook & Son, George Street, Edinburgh.

Set within a double heart of garnets, with Scottish pearls and upon a St. Andrew's Cross of crystal and blue enamel, a fortified town, decorated with small pendant pearls. The conjoined hearts are crowned with a wreath of roses and laurel, the whole symbolising the affection and regard that the two hearts of Highland and Lowland Scotland have for the Capital City.

The Chain is gold, 30 inches long, with six octagonal links bearing symbols of Celtic and Lowland origin.  These read from the centre clock-wise - a cross for the Celtic art, a wheatsheaf for a Lowland cultivation, a harp for Celtic music, a town for Lowland population, a spinning-wheel for Highland industry, a book for Lowland Universities.

The symbols were chosen because they represented arts and industries in which women have a share. Between these links are two gold links separated by an enamel flower, a daisy from the Lowland pastures alternating with a grass of Parnassus from the Highland hills enamelled in natural colours. The rectangular links are enamelled in a raised and lustrous black and white enamel. The centre link which has the clasp and pendant is set with small whole pearls".

Worn by the Lady Provost at (evening) ceremonial and formal occasions.  On 23 November 1956 the Earl of Rosebery, Lord Lieutenant of the County of Midlothian, handed over to the City The Rosebery Jewel which had belonged to his sister, the late Lady Sybil Grant. 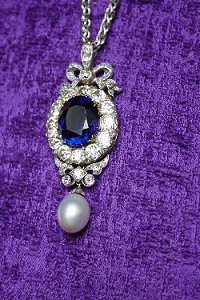 An oval cut sapphire, weight 37.02 carats, surrounded by 12 old cut diamonds, weighing 1 carat each, with the balance of the diamond weight being 3 carats, from which is suspended a pearl drop.